Hey everyone,
I'm trying to blog a lot as I'm heading out on the road with Broadview tomorrow. Here are a couple of beats inspired by some Soca beats I heard combined with someTony Allen afro-beat inspired stuff. I think it's important (at least that's what I'm telling myself) to show myself in the process of working out these ideas and developing them. I don't have them nailed by any stretch of the imagination, nor would I present myself as anything more than a interested bystander/student of these styles. What I am doing. however is using things I've heard to expand my palette and create greater variety in the grooves I play.
I'll keep working on them, I promise!
Posted by Ted Warren at 12:59 PM No comments:

Hey all,
The trio Broadview (Mike Murley, Rich Brown and yours truly) is leaving for out tour in a couple of days so I thought I would include some video of a recent fun gig we did for the Kingston Jazz Society.
The two tunes I'm including today are Rich's "Sweet Lullaby" and my "Tango Ruby"
Hope to see you out there!
Posted by Ted Warren at 10:23 AM No comments:

Hi all,
I had another chance recently to hear a couple of young (high school age) drummers playing with bands in a school setting. They both played very well, but some aspects of their playing reminded me of some things I did ( and still do sometimes) in my playing that weren't very effective and were coming from a place of ego rather than serving the music I was playing.
I was very concerned with sounding hip.
Now, "hipness" is a very relative thing but as young player I thought "hip" drummers....
- never play hi-hat on 2 and 4.
-never play the ride rhythm the same way twice.
- tune their drums very high.
- listened to the popular jazz drummers of the day; in my case, DeJohnette, Jeff Watts, etc.
- had the drums constantly shifting textures. Repeating anything or playing a pattern was never hip.
So how come when I listened to recordings of myself I sounded like crap?
Well, lets look at some of my assumptions about "hip" drumming.
Static or repeating limb patterns (h.h. on 2 and 4, the basic ride pattern, and even the dreaded 4 on the bass drum) can be a great way of creating order and structure to time playing.
Just because a drummer plays h.h. on 2 and 4 throughout a tune doesn't mean he/she can't play shifting or dynamic parts with the rest of the kit. In fact, it's a great exercise to assign one limb to play a role that doesn't change during a whole tune while the rest of the kit plays openly and through-composed. For example
1) h.h. on 2 and 4, other 3 limbs improvise.
2) standard ride pattern " "
3) four on the bass drum " "
4) snare drum on 2 and 4 " "
You can assign other static patterns to each of the four limbs as well, but my main point is, if any of these first 4 examples give you trouble, your coordination probably isn't as good as you think it is, and needs to be addressed.
Also, certain styles ( such as backing a vocalist or playing with a big band) require more static drumming. It's a pet peeve of mine to see drums playing Count Basie charts and mucking around with their left foot. That's not part of the dialect baby!
Tune your drums where ever you hear them. This also might change over time, depending on what you're listening to. Bill Stewart tunes high, Joey Baron tunes low, they both sound great!
Remember that all music is a continuum, and the latest and greatest make way more sense in the context of what happened before them. Also, if you're a 20-something drummer hoping to play jazz and you listen to Ari Hoenig (who I love, by the way), do you know who else listens to him? Every other 20-something drummer on the planet with the same aspirations. Start digging into lesser known and older players as well as other types of music and develop you with as much input as possible. Another thing about checking out players of the past is you can discover threads of concepts that maybe have been dropped or ignored.
Finally, I've mentioned it before but I'll mention it again. Drum parts are cool. Tony Williams was one of the greatest improvisors on the drums ever, yet for his beautiful tune "Sister Cheryl" he composed a very simple yet distinctive drum part. It became a hook for the composition and whenever he started playing that part, you knew that tune was coming. Brilliant!
That's probably a great tune to end this on. Thanks for coming by.
Posted by Ted Warren at 7:49 PM No comments:

Labels: Listen to the geezer again Don't be like I was

Hey all,
Today I'd like to share a video of one of my favorite musicians, Jon Christensen. Sometimes I hear or see someone play and it goes way past all the technique etc. to the feeling that someone is speaking the ultimate truth on their instrument. This, for me, is a prime example of that. Hopefully it will be for you too. If not, find someone that is speaking the ultimate truth to you.
Posted by Ted Warren at 8:03 PM No comments:

Hi,
Today I'd like to discuss an issue that's common to all musicians (especially improvising ones ) today. A big part of developing a concept and identity as a band involves working out material in front of an audience. There is really no substitute for this. Practicing and jamming are all good but, as Jim Vivian recently said to me, "You have to see the whites of their (the audience's) eyes".
The conundrum is that it's very difficult for one band to work very much, especially without traveling. If we look at the schedules of bands like Coltrane's or Miles' in the 60s or earlier, it's staggering how much they played, including residencies at clubs that went on for months sometimes. Now, I'm not taking anything away from the incredible talent in these bands, but even the worst group in the world would benefit from schedules like that.
I'm including a video of Kim Ratcliffe's trio. We were recently playing at the Rex, doing mainly Kim's original music and it certainly developed, but that was through playing a gig every Wednesday for a month. When I first moved to Ontario we would have gotten to that point halfway through playing a week at George's or the Senator.
Don't get me wrong. I'm not longing for some bygone era or making excuses for not developing with my fellow musicians. I think we all need to realize that this is what we face currently and we have to get deeper into the music than ever before. EVERYTIME WE PLAY!
That's my plan anyway.....
P.S. Has anyone noticed that I look more and more like Popeye when I play?
Posted by Ted Warren at 6:36 AM No comments:

Labels: Working as a band

Hey all,
Here's a snippet of video from a recent concert Ted Quinlan, Pat Collins, Adrean Ferrugia, and myself playing with Tom Scott. Both this concert and a David Sanborn gig I saw last year really made me think about the whole rhythm and blues saxophone thing and how I really need to check out more of that music. It's so much fun. Also notable was despite having a very successful career and probably having being paid very well for his efforts, Tom Scott seemed to really enjoy playing. In fact, I said to him a one point that he could probably sit on a beach somewhere if he wanted to, his response was " Yeah, but *uck that!".
That's my plan too when I get to be his age!
Posted by Ted Warren at 7:36 AM No comments:

Tour and other stuff 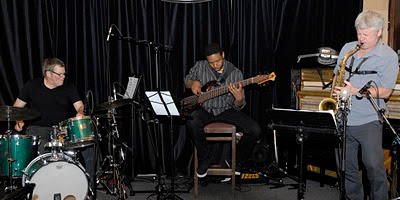 Hello all,
Just a couple of bits of news.
The trio I cooperatively run with Rich Brown and Mike Murley (collectively known as Broadview) is touring in March and I thought I'd provide the dates in case any Trap'd viewers want to check it out.
March 2nd- Cafe Paradiso, Ottawa
March 3rd- St. FXU, Antigonish
March 4th- Yardbird Suite, Edmonton
March 5th- The Bassment, Saskatoon
March 6th- The Cellar, Vancouver
Also congratulations to all the Juno award nominees especially one of my fave bandleaders John Macleod. The Rex hotel orchestra big band CD "Our First Set" has been nominated in the traditional Jazz category. There's so much great Canadian Jazz nominated this year, it's very inspiring!
Toodles!
Posted by Ted Warren at 12:51 AM No comments: