Quick post today of a 3/4 idea from the almost criminally under appreciated drummer, Jimmy Lovelace. This is from a live version of "Full House" from the recently released Wes Montgomery in Paris album. 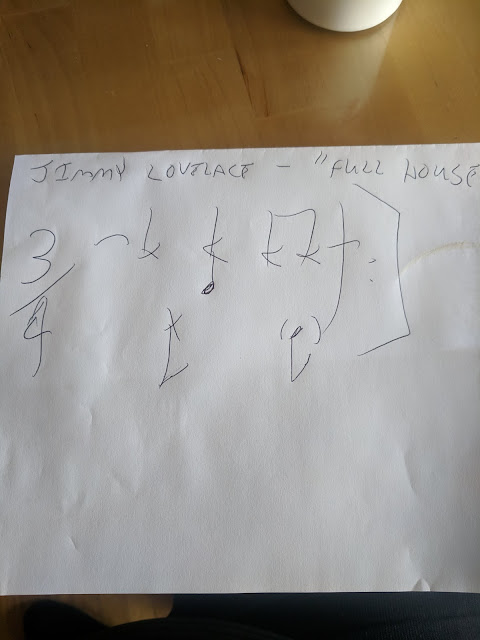 Although Mr. Lovelace starts Wes' solo in a fairly conventional swing 3 feel, he starts weaving in and out of the idea above during the 2nd chorus. One of the cool things about it is that although it's a metric modulation that makes it sound like he's playing a solo swing 4, it resolves to the + of 3 and leaves out beat 1 once it gets started, giving it an extra snake-y feeling. I can't tell if he's playing bass drum at the end of the phrase or not so try it both ways.  Check it out....

It certainly doesn't seem to disturb the flow of the rest of the band at all, so I suspect he had done this before. All of Wes' band has a very interesting ability to react to what was going on in Jazz in the 60s with modal playing etc., and adapt it too their own purposes.

Now, we can all learn it and adapt it to our own purposes! Thanks. :)
Posted by Ted Warren at 2:53 PM No comments:

Hey folks,
Thanks to Mr. Stanton Moore and the good folks at DRUM! Magazine for this concise video on a LLRLRLRR sticking and some applications of it. Check it out.

I think it's important to note this post includes 2 things I usually find really annoying, mainly practice pads and a "novelty" location. But Moore gets such a beautiful, funky, and varied palate from the pads that I found myself grooving along to the sounds with him, and the presentation of this lesson on a  gondola is so endearingly goofy that it warmed even my cold, cynical heart! :)
Posted by Ted Warren at 6:28 AM No comments:

This isn't about us: epilogue

Recently, a talented and beloved member of the Toronto Creative passed away tragically and suddenly. Justin Haynes' contribution to the Canadian music scene has been well documented elsewhere, so I'll just say that if you haven't checked out his music, you really owe it to yourself to do so.
The week of Justin's death, I had two gigs that weekend. Both had their issues. The first one was at an establishment that likes to think of itself as a dedicated music room, but really their main purpose is selling food. The second gig was in a listening situation but it was with a front person who seems to think the more instruments they play (including random percussion ) the better with no regard for the quality of said playing.
As the gigs came up, I was feeling very sad about Justin's death, partially because I had a sister die some years ago for similar reasons. I decided to dedicate both evenings of music to them....

At gig one there was a table seated right next to the drums. They weren't only ignoring me, they were screaming over top of me! For 3 sets! I kept thinking they wouldn't want to hear me and either move to another table or leave entirely! Nope! They got up and left as we were playing the last note of the night! Funny part is, I barely noticed them! I was able to concentrate on the sounds the piano trio was making and thoroughly enjoyed myself.

At gig two, the front person behaved as usual, and again, it didn't bother me. I had a lovely time playing the drums and it felt meaningful to me.

What happened? I think a couple of things. I think Justin's death reminded me ( once again ) that we have a limited time here on earth and there's no time ( as my beloved Fabs would say ) for fussing and fighting my friend. I think the other thing is I believe Justin and my sister heard me and were helping me focus.

Anyway, be kind and gentle with yourselves, and I'll be back soon. :)
Posted by Ted Warren at 11:51 AM No comments:

Howdy,
One question I get asked fairly frequently is " What direction do you make your circles in when playing brushes"?
Basically, one can circle in ( right hand counter clockwise, left hand clockwise ) or circle out ( direction of hands reversed ). I tend to find matched grip players tend to circle in more, because circling out seems a bit more awkward for non-traditional grip players.
I think if you're just starting on brushes, it's good to find one way that works the best, and stick with that as you develop your technique. However, if you're a true brush nerd like me ( I blame Dad and the Papa Jo record he gave me when I was in grade 9 ) I think you'll discover there are great advantages to being able to circle both directions with either hand. They feel different and I think they are both useful at different times. So, how to work on this? Well, figure 8s work really well in getting us comfortable with both directions and create a pattern that's great in it's own right.

Here's a couple of more videos of ways to get looser with the concept.

Also Philly Joe's great book " Brush Artistry" ( now out of print but can be found online ) can be very useful for inward circlers who want to work on their outward circling chops.
Please be reminded though, it's more important to be very comfortable with one direction of circles than to play both ways poorly. I well aware that many wonderful drummers are not nearly as obsessed about this stuff as I am. Good luck and have fun!
Posted by Ted Warren at 6:25 PM No comments: