As the Mask would say, SOMEBODY STOP ME!!!

Here's another doubles around the toms with melody in the accents. This time the tune is "Things ain't what they used to be."

So after fooling around with the idea from yesterday's post I came up with this. Still playing "Blue Monk" in accents, still playing doubles, but now moving the doubles (1set each) between snare and  3 toms.
The cool thing about this is the sticking resolves every 1 measure while it takes the tonal pattern 2 measures to start again.

It's a challenge to have the melody notes come out clearly enough (I'm speaking to myself as much as anyone else on this) so don't be afraid to take it slow.

Hey folks,
Here's a simple (in theory, at least) idea of playing triplets in double strokes while playing the melody to a tune, in this case "Blue Monk".  Here's a vid:

There are lots of ways to apply it around the drum set (RH on h.h., LH on snare, each hand on a different tom, etc.) so I'm going to try working on it this afternoon and I'll post more if there's something  I particularly like.

Amanda Palmer has now agreed to pay All her musicians.
It is good to see people doing the professional and decent thing.
Go ahead and check out what she is doing.
It is not my cup of tea but maybe you will dig it.
Posted by Ted Warren at 5:57 PM No comments:

Hey folks,
A couple of things.
As I'm sure some of you are aware by now, singer Amanda Palmer is trying to enlist musicians to play on her tour without being compensated. George Colligan's Jazz Truth has the lowdown.
If you feel as strongly about this as I do, please sign the petition and let this "artist" know how you feel about musicians being exploited.


Okay, on to happier things. 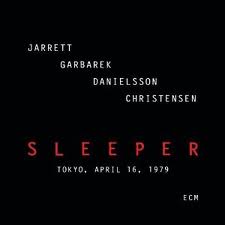 I just picked up Keith Jarrett's "Sleeper" off of iTunes and that's pretty much all I've been listening to this last week. This recording captures Jarrett's European band in 1979. They sound great! It's wonderful to hear the live version of "Personal Mountains" as well as material more associated with his Standards trio, namely "So Tender", and "Prism".
Jon Christensen sounds great throughout and I think this recording helps cement the idea that in a live setting, Danielsson and Christensen, were a lot groovier and tougher than they were ever given credit for.

Why this long for the recording to be released? Apparently, Jarrett didn't like it. For more on this see Peter Hum's Blog.
This makes me think that artists aren't always the best judge of their own work.
Recordings like this remind us of a time when Jarrett was creating new music, and as much as I love the trio with Peacock and DeJohnette, it's a bit more of a repertory band. ( I realize that's being a bit unfair. Jarrett's still improvising and I've never accused say, Red Garland of that even though he mainly played standards throughout his career. Jarrett has set the bar for himself very high indeed, because of his past work.)
Anyway, regardless of my gushing, go pick it up. You won't regret it!
Posted by Ted Warren at 10:57 AM No comments:

Gonz at the Jazz Room

Here's some audio from my recent gig at The Jazz Room with Jerry Bergonzi, Jim Vivian, and Brian Dickinson. Hope you enjoy it.

Here's a fairly simple exercise to increase your dynamic range, and have you read dynamics more consistently, even when sight reading. 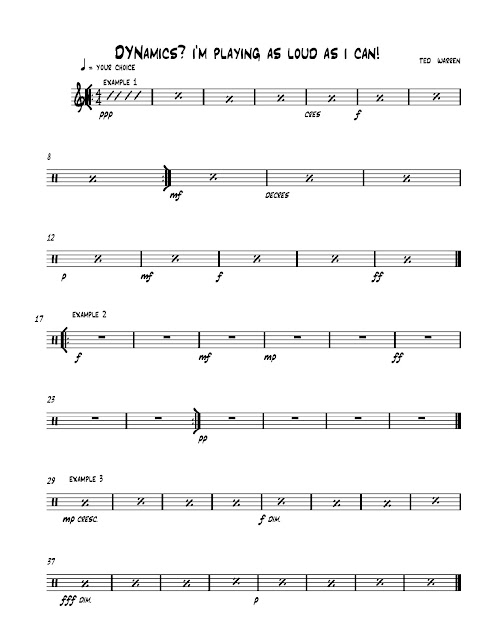 In this exercise, just play any beat you're comfortable enough with to be able to play without thinking about it. Then, read the dynamics and bar structure of each of the examples. In a nutshell, we're only reading the information on the outside of the measure. This will help you get used to reading dynamics the first time you play a piece. When you play dynamically, it sounds like music, rather than just reading notes!


Thanks and Ta!
Posted by Ted Warren at 6:21 AM No comments:

Howdy,
Here's some great footage of the Lookout Farm (with the great Jeff Williams on drums) in "75.

You know, it always sort sticks in my craw that the 70s is often represented as the time that Jazz forgot or something like that. In the states, there were great musicians coming out of the loft movement, and I think this band is  a wonderful example of that. There were also great things coming out of Europe on the ECM level as well. All this music has stood the test of time , I think.
Yes, no one's wearing a suit! Who cares? That doesn't have anything to do with the music!

Posted by Ted Warren at 6:46 AM No comments:

Hey all,
Here's a tune from a video of Mingus' band in Norway in '64.
Dig Dannie Richmond!
I actually got to see him play on my first trip to NYC about 20 years after it was recorded and he sounded great then too! Enjoy!

Posted by Ted Warren at 6:08 AM No comments:

Hey,
This may be a post only a (my) mother could love.
I played a solo gig at Knox church here in Guelph and decided to film it.
I used to play solo gigs in Montreal in the early 90s but this one was different for me because:

It was completely improvised.
I played continuously for the length of the concert.
It was a concert rather than a club setting.


I had a great time. The crowd was small but mighty, with a diverse age demographic, and they seemed to enjoy it.

It's continuing to be an exciting week. I'm also playing at Gallery 345, then at the Guelph Jazz Festival, and finally the Jazz room with Jerry Bergonzi so if I manage to record any of that, you'll be subjected to more of my ego trips!
Posted by Ted Warren at 6:10 AM No comments:

Well school's in and hopefully it means my posts will be more frequent.
Today, I thought I'd talk about one of my favorite movies, "The Big Night".


A failing Italian restaurant run by two brothers gambles on one special night to try to save the business.

This is a movie I feel all musicians should see because one major point that the above plot synopsis doesn't explain is that it's a story of the uneasy relationship between art and commerce.

Primo is a chef. He feels cooking is his art form and shouldn't be compromised in any way. His younger brother (Secondo) manages their restaurant. He admires Primo's gift but realizes the restaurant will fail if they don't go a little more "commercial".

The cool thing (without giving too much away) is that neither art nor commerce ultimately win out. The brothers have to balance their strengths and values, much as we all do. There are no easy answers, and the answers there are are very personal.

It's a great movie. Go see it and be inspired!
Posted by Ted Warren at 5:54 AM No comments: