I'm sure a lot of you reading feel like quoting The Rolling Stones " Mother's Little Helper" when referring to me. You know, what a drag it is getting old! Regardless, I have a few blog bones to pick with the drumming world. Here goes.....

I came across this on Scott K. Fish's blog. It's wonderful that he is posting his archive of interviews from his days at Modern Drummer. It's a lovely trip down memory lane for me as well as a reminder of what all the greats were saying back in the 70s and 80s.

So, here's the thing ( and I mean no disrespect to him or Joe Morello, who I also admire greatly. )
At one point in the interview, Mr. Morello refers to Mel Lewis as a "service drummer", talks about his lack of "technique", and talks about how improved he would be if he had "chops". I would like to address these points one by one, and reiterate that I mean no disrespect to Mr. Morello, and I am aware he can't defend himself either. This is just my small opinion in my corner of the blogosphere !

1. The term "service drummer" makes it sound like drummers that were more interested in keeping time than soloing are making some sort of weird compromise.

Keeping time is probably 95% of our job folks, and if you don't get turned on by making the band sound and feel good, you should probably play a different instrument! Plus Mel Lewis was a MAJOR soloist. It's not like the fastest drummer always plays the best solo. Which brings us to.....

2. The terms "chops" and "technique" mean velocity now, and little else.

Mr. Morello talks about not overplaying etc. Is that not a technique? What about keeping good time, having a good sound and dynamic control? All techniques, all take a lot of effort and practice to do well, and all Mr. Lewis was great at all of them.

I was fortunate to see the Village Vanguard band,  led by Mel,  in the late 80s. The main thing I remember is how GOOD everything felt. He played a couple of short solos, and as always, they were creative, interesting, and appropriate. Maybe if he had overly concerned himself with velocity, we wouldn't have had that feeling......

Here's Mel playing a great solo on " Greetings and Salutations" with his big band with Thad Jones. I love this for several  reasons. I love to hear Mel playing a rock beat. I like how he and the conga player play together, and it takes some SERIOUS STONES to leave that much space in a drum solo!

Now, you would think after this Mel Lewis love-in that I would leave him out of rantville! I do, actually, at least indirectly.

A while ago Chris Smith posted on the Drum Hang  about a technique  of Mel's called "Rub-a-dub".
( You may have to scroll down to find it.)  It's a way of using stockings to play rhythmic figures
( amongst other things ) and keeping the ride cymbal involved. Well, there was a lot of response to this. I saw at least 3 other blogs then refer to it. It's a very cool technique to use in a big band, especially when dealing with section figures. ( Rhythmic figures written above or below the staff, usually meaning one keeps time on the cymbal while playing the rhythms with snare drum and/or bass drum. Section figures usually look like this. ( See Example 1. ) 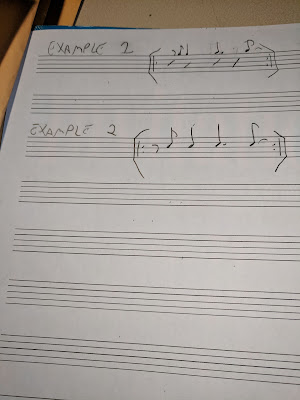 Ah the "natural font". BTW both examples are in 4. So, in the first example we can see that although there are figures written above the staff, in the middle of the measure are slashes indicating that we should keep the ride cymbal going throughout this. Rub-a-dub works very well in this environment and creates a sort of fun, loose groovy feel. because not all of the band is likely to be playing these figures, we don't need a huge amount of clarity. However, if we look at example 2, we see that the rhythmic figures are written in the middle of the measure, which generally means we need to play the figures with appropriate long and short sounds to match the duration of the horns notes. ( In this case, the measure could be thought of as short, short, long, long. ) So, if we need a lot of clarity in the figures. ( Say we're in a big band backing a singer with arrangements that are short and mainly about presenting the tune. ) We need to play the figures in the second half of the measure  with CRASHED cymbal and either snare drum or bass drum. I fear with the rub-a-du concept, a lot of young drummers are going to get obsessed with playing on the ride no matter what else is going on in the music because that's what they think is swinging and groovy, but this isn't always the case. ( A lot of the endless Ted Reed exercises do the same thing, and frankly, miss out on a lot of what interpreting a chart in a big band is about. )  When one has a long note figure, don't DING it, CRASH it! Sometimes in a big band setting I may go a bar or two without playing the cymbals in any sort  "ride" way. That's okay. I remember DeJohnette saying he looked at cymbals as like sustain pedals on a piano,. We'll still remember that sound and feeling if it isn't there for a second or two

Okay, I've ranted enough. As always, remember that there are many roads to Rome. See you soon. :)

Hey all,
Just posting some links to some great stuff featuring Adam Nussbaum. First is this wonderful podcast from Drummer's Resource. Adam's intense passion, knowledge, and love for the music is is clearly evident, and there's much to learn from his insights.

Next is this Before and After listening session from Jazz Times. Again, Mr. Nussbaum is incredibly eloquent and knowledgeable. It's interesting when he mentions Elvin Jones and how generous and helpful he was, which exactly explains my experience with Adam. Check it out folks and learn. :)
Posted by Ted Warren at 11:36 AM No comments:

Here he is with Brother Jack McDuff. Now THAT'S a shuffle!!!!


Also, here's some great isolated drumming of Reggae great Carlton Barrett on Bob Marley's " Get Up, Stand Up ". Gorgeous!

Thanks to Dan Weiss for hipping me to this via social media. Talk soon.....
Posted by Ted Warren at 7:25 PM No comments: