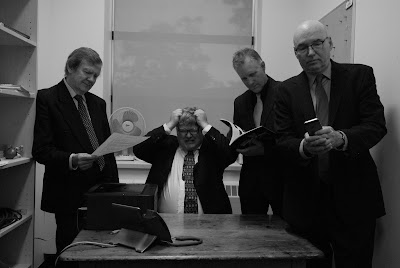 Posted by Ted Warren at 1:56 PM No comments:

Hello,
Here's a quick transcription and audio example of the 3/4 pattern that the great unsung hero George Brown plays with Wes Montgomery on " Blues Riff" from the album Portrait of Wes.The Viennese waltz thing on the hi-hat on the and of one and beat 3 is what makes it a bit tricky. Despite this, it's a great way to work on this hi-hat pattern as, unlike Elvin Jones' use of this beat, the rest of the kit plays a four bar repeated part, at least for the head, although the rest of the drum performance is reasonably static, although you'll have to figure that out for yourself. 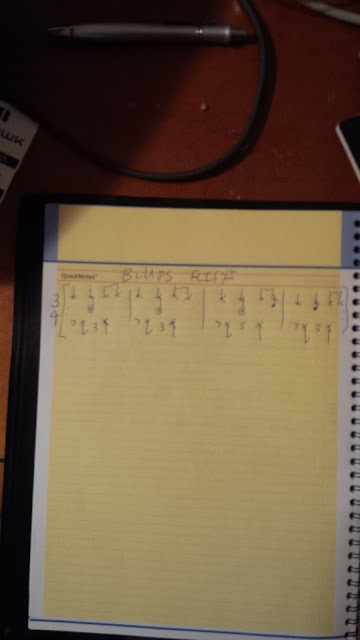 My apologies for the notation and the "natural font". I was having trouble with the new version (for me) of Sibelius. I'm hoping you'll find this has a certain "primitive charm"! No? Me neither!

I think it's important to reflect on two things in this example. One is how much static, repeated material the drums play in this performance. When I was younger I really thought "Jazz" drumming meant every bar had to be something different but as I matured I realized the power of hypnotic continuous grooves. Mr. Brown isn't playing what he's playing because he didn't have ideas, he's playing to lay a solid ground floor for the improvisations.  Point two is that there are many.many great drummers that added to the music, some of whom are not well known. That doesn't mean what they did wasn't great. I feel bt discovering these many great player's contributions to the drumming collective, we gain a deeper understanding of our instrument. Don't just focus on the 6 people playing drum festivals, folks! Thanks!
Posted by Ted Warren at 8:13 AM No comments:

Just a short post today. Inspired by this wonderful video of the great Allison Miller.

What I especially like about this video is that it addresses just finding new colours on the drum set, something that anyone who knows me will tell you I'm passionate about. I must admit that seeing the above clip brought out my natural competitive tendencies. By that, I don't mean, I need to prove I'm better than Ms. Miller or anything. It's more like she's saying to me" Remember Ted? You used to work a lot at finding new sounds on the instrument! You should get back to that, because it's so cool and fun!"
I once remember Hal Galper talking about how when one has a reaction to a recording ( or video, in this case) you need to figure out what the person on the recording is telling you about YOUR playing. Don't be afraid to assess any input you get in terms of how it relates to you and your art. As always, have fun!

Posted by Ted Warren at 9:18 AM No comments:

As many of you know, I have had a very good and fruitful relationship with the Vic Firth Company. Recently though, like an old relationship, I had been thinking about the brushes I grew up playing on. For our purposes let's call them brand R. In fact Vic Firth sticks didn't exist when I first started playing. So I decided, since my cymbal alliance recently changed, I owed it to myself to make sure I was playing the brushes that were best for me. Please don't misunderstand, I was very happy with my VF brushes. Just doing research. Lo and behold, I found VF and brand R brushes pretty comparable except that VF brushes fan out way more, and provide a more lush sound for ballads. ( Yes, you're much more likely to get brush strands caught at the edges of the snare drum. It's just something you have to get used to.) That and that brand R with tax were $35 Canadian (ouch) convinced me that I was were I belonged, with Vic Firth.

I would encourage everyone to have these "taste tests" occasionally to find what works best for them.

Posted by Ted Warren at 3:40 PM No comments: