Hi.  This is a short improvised piece dedicated to my adventures in attempting to expand my employment beyond matters music-related. Enjoy!
Posted by Ted Warren at 12:49 PM No comments:

From henceforth, individuals who  play pads more than drums OR post more than 2 incidences of them playing said pads, they will be hereby referred to as "padders" and the activity they are involved in will be named "padding"……..

Okay, this first update is sort of rant-y and slightly negative but I think it will be leavened somewhat by the next one. I wanted to talk about a couple of things I've heard lately. Firstly, it was of a young and very talented drummer filmed playing along to a movement form a Bartok string quartet. I've always loved Bartok's music, especially his string quartets, and actually have played with recordings of it as well, although I wouldn't claim to know any of them nearly as well as this drummer does. That's the good part. What I don't care for so much is that he seems like he's hearing it as a track to play to rather than a piece of music to interact with. He is always playing beats, and even fills I'm pretty sure he's memorized and doesn't deviate from, and the result to my ears sounds like a Prog-Rock duet for string quartet and drums…..

Item 2 that got me thinking is a young instagram drumming star. He has LOTS of velocity on the drums and in the first few videos I've seen of him, most of his concept and vocabulary seems to come from Buddy Rich, including his posture and the faces he makes while playing. In his latest video, he is actually playing along with one of Buddy's solos, note for note.

So, why am I complaining about these to particular items? Well, for one thing, no new content is being created. For another, these types of videos seem to be further evidence of a world where the drums are something that plays along to something else to create context, rather than context coming directly from the drums.

I can't help but feel that some of the great pioneers of the drums, including Buddy, Max Roach, Papa Jo, Tony Williams, Sunny Murray etc., would be disappointed by this turn of events, and at least in popular culture, the drum set feels like it's evolution is going a bit backwards. Of course, this is my opinion and my opinion alone…….

Between writing this post and it being published I found out that the great Keith Jarrett, after suffering a series of strokes has lost the use of his left hand and likely will never play again in public. While the news of this is undeniably devastating, it got me thinking about the act of playing music and how temporary in ultimately is for all of us……

Jarrett was arguably one of the world's greatest improvisors, and like many musicians like Miles Davis, Sonny Rollins (who is also not playing anymore),  and Elvin, seemed indestructible and it felt like he would always be around, playing at the same high level. Of course like all of us, he's human, and in a human body that eventually ages and weakens over time. This, on the quick heels of Eddie Van Halen's passing, is coming at a time when my practice on piano and drums seems at its most productive ever. Please don't get me wrong, I am not comparing myself in any way to the above artists I mentioned. I am, however, feeling like I am still growing and improving as a musician and look forward to every practice session/jam/(occasional)gig etc. I approach. With the events of the last couple of weeks I am also acutely aware that my playing music, and indeed my life, is finite. One of the things that creates beauty is that it is transient. I truly believe that. I have no idea what tomorrow will bring so I will endeavour to make the most of my remaining time as a musician and human, and I would encourage you to do the same. :)

See? First negative, and then positive! :)

Posted by Ted Warren at 4:40 PM No comments:

Hey all, short post today.
I found this on Linkedin. I generally find I don't get a ton out of this particular platform but I did like the following….. 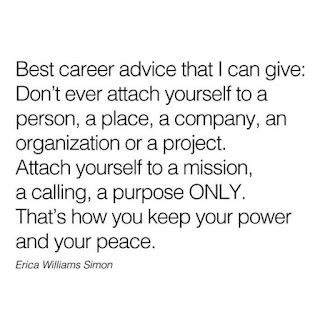 I think I have a tendency to not only attach, but to get attached so this is very good advice for me in a discipline that constantly changes. You get gigs, you lose gigs, venues open, venues close etc. Stay safe! :)

Eddie Van Halen Has an Important Message for You

Like many people of my generation, I was extremely shocked and saddened to hear of Eddie Van Halen's death last week. As I checked out a lot of media and reflected on his life and legacy, I was struck by how in any photos of him with his guitar, or in any videos, he's always smiling. He always seems to be having the time of his life and be super in touch with the joy of making music. Further to this, this short video has been making the rounds……

I think no matter what happened with money, fame, or possibly more negative influences in his life, he seemed to be somebody who was completely in love with music his whole life.

Thank you for the music Mr. Van Halen, you will be missed but not forgotten.
Posted by Ted Warren at 10:42 AM No comments:

Hey all, I was lucky enough to stumble upon this footage of , to the best of my knowledge, a version of The Jazz Messengers that didn't release any recordings. They are playing "Crisis"; one of my favourite Freddie Hubbard compositions. What can you say? This is Jazz. Jazz is a process as much as a product. It's not meant to be perfect. It is music played in the moment and Mr. Blakey sounds fantastic! Enjoy!

Posted by Ted Warren at 3:37 PM No comments:

Recently I was able to attend an online clinic of Jeff Watts' put on by the Drummer's Collective in NY. it was hosted by fine drummer in his own right, Ian Froman, who did a great job, fielding questions for Mr. Watts, and asking some very intelligent ones of his own. I was only able to attend the first hour, but I came away with some concepts and exercises that I will "share with the class" for those that missed it.

1. On speaking generally about playing metric modulations, Watts stressed the idea of really knowing where own is in the home tempo, and creating a strong resolution when the modulation ends. Without this, he said it would be better to have played strong time rather than any resolution at all.

2. Specific idea for working on modulations. Play any sort of time feel, then the pulse off the half note triplet, halftime, and then dotted 8ths. 4 bars for each modulation (including the original groove/tempo) Play it while singing/hearing a blues form, and whatever modulation you play will show up in a different part of the form because it's a 16 bar cycle over a 12 bar form.

3. Play every rhythm/beat you play in its 8th note and triplet form. Playing Songs? Play it as shuffled 8ths. Triplets? Play the closest str. 8th rhythm you can figure out.

I'm sure there was lots more but, as I mentioned, I had to leave partway through.

I would recommend anyone check out the many online clinics being offered in our current environment. Inspiration is often just a click away! :)

Posted by Ted Warren at 9:55 AM No comments:

I have never believed that some people are creative and others aren't.  I do, however, feel that creativity is akin to a muscle, and muscles that aren't exercised atrophy. Now, if one hasn't worked on this before, it can seem a little daunting, but keep in mind creative thinking and acting is often done in small ways.  We could apply this to our practicing by doing our routine ( if we have one) backwards, or out of the usual order. Another simple way to get us out of our usual patterns would be to change the placement of components of the drum set. Ride cymbal on the right, crash on the left? Reverse them! I guarantee your usual movements around the cymbals will sound different, and it will take some thought and physical shifts to do them the way you usually do! I recently set up a five piece kit at my practice space and, borrowing an idea I got from Max Roach, reversed the order of the tom mounted toms, like so….. 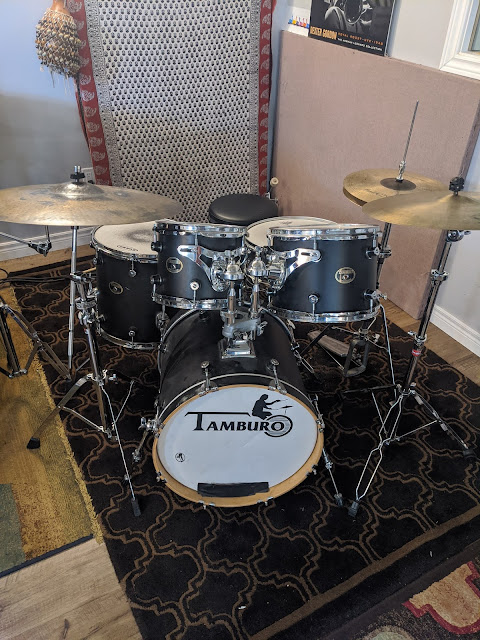 Once again, habits are broken and "regular" tom patterns take on a whole new challenge.

Other possibilities like changing dynamics, rhythmic grids, and tempos of anything I've gone on about at length before, but what about playing with two different utensils in your hands? Again, a beat you played using two sticks will sound VERY different with a stick & a brush, a mallet & your hand, etc. Along similar lines is using different parts of the drum set than we normally do as send sources. Ever played an idea using the shell of one of the drums? How about the cymbal stand? Moving the snares on and off? These sort of things can be very fun to explore and come in handy, especially in more open/free music settings.

Another really good way to begin a session at the drums is to play something, anything, at the drums and try to make a short composition out of it. By short, I mean it can be a minute long, if you like. The idea, is to take the first thing you played and then develop it so it has a beginning, middle and end. The main thing is not to judge the thing you played, just to work with it. I got this idea from Ari Hoenig, and it can be a great help to developing improvisational skills.

The whole point is, always ask yourself, " How could this be different/changed/varied"? As you make a habit of this, creative thinking and action will come automatically.

Have fun on your creative journey!

Posted by Ted Warren at 7:19 AM No comments:

Just another brush off

Hi,
Filmed this awhile ago just exploring some sounds. I realize it's a little ironic, me playing on snare drum only, after I give a lot of people grief for their "retro-snare-y" solos, but sometimes it's nice to explore the colours in one part of the drum set, especially with brushes. :)