Hey all, here's a right hand brush pattern I stole from Pete LaRoca. The lines represent brush sweeps from side to side (I prefer moving to the left first) and the dots are regular taps. You can play this with any left hand comping with cross stick. I found it a bit challenging at first coordination-wise but it's a nice groove that works at a lot of tempos. Plus it has us incorporating different motions into our right hand repertoire, which aids flexibility. Have fun!

Hello,
Just 2 brush patterns today. You'll have to figure them out between the description and diagrams only. I'm unable to film the examples right now, even in my lowly phone book form, because my house is being renovated and I'm up to me ears in (Barney) rubble!

Both patterns use the concept of the left hand moving back and forth in basically a straight line. In Philly In 3 , the left hand is doing this in a triplet rhythm. The pattern is basically Philly Joe Jones' Trill, but in 3/4. This creates an extra wrinkle because the left hand keeps switching which side of the drum it's on. In other words, if you start the triplet sweep moving towards you on beat 1, in the next bar on the downbeat the left hand will be moving away from you. This will take a little getting used to, but with a little practice you'll have a nice flow of triplets in the sweep. 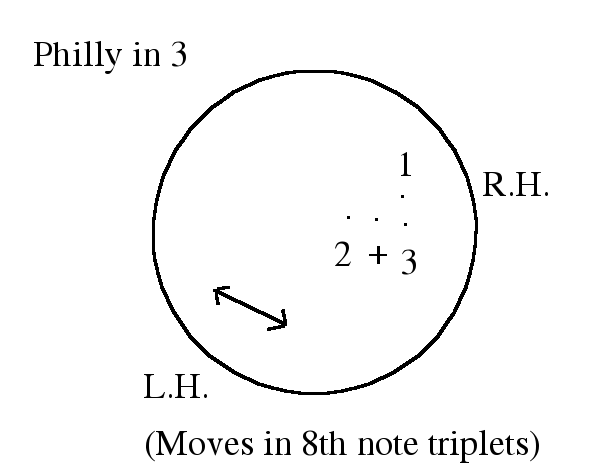 Also I should mention that all the right hand does is taps out a standard 3/4 ride pattern.

In the second example, you're going to be doing the same motion with your left hand, but it's now not going to be in any particular rhythmic grouping. Think of the left hand in this case as "vibrato" rather than timekeeping. You can experiment with how fast or slow the left hand moves as well. The right hand will keep the time with the one big half note circle it makes. 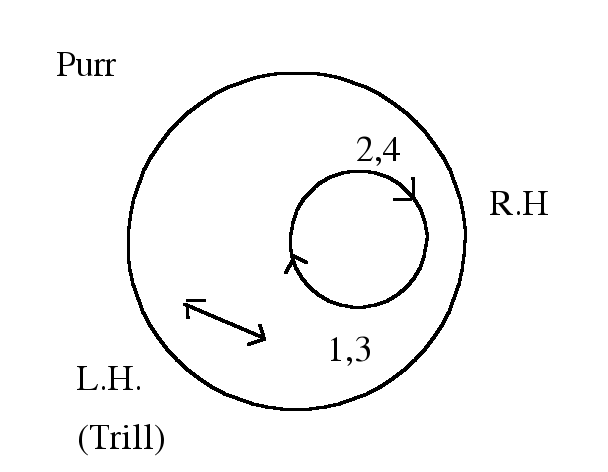 I hope you enjoy working on these patterns and I promise I'll post again soon.
Posted by Ted Warren at 10:24 AM 1 comment: