This coming September, I will have been playing the drums for 45 years, and man are my arms tired!

Seriously, it amazes me after all this time, experience, listening, and frankly hard work, there is still so much to learn.

Case in point. I have been using a hybrid "push/pull" technique to play streams of notes, especially in my right hand, but I've never been super satisfied with the results, and it tends to feel very inconsistent. I stumbled across Rick Dior demonstrating Peavey drums. As he aptly showed in that video, he is a great drummer with very good technique. So, when I saw he had some videos involving push/pull, I had to check it out. NOTE: This is not his first video on the subject, so if you're just starting to develop this, I would advise you to watch his beginning video first.

So, there's lots of great info here. I have decided to work the concepts he's talking about here to clean up my technique. I'm vowing to work on it at least a half hour a day, but also to make sure to play along with recordings, jam etc. as well so I don't get obsessed with this one technical idea. ( I have done this in the past, and the results weren't pretty.) When this post is published, I'll have been working on this for about a month, so I'll let you know of my progress. Oh, I also wanted to mention that I like his demonstration because he also mentions how to apply this technique, because without application, what's the point?

So, it's not really a trick I'm working on, but a technique that hopefully will open new paths to creativity. Stay tuned……

It's only been 3 or 4 days, but it's starting to feel a LOT better, particularly in the left hand. I'm also trying to be equally comfortable with the technique in French and german grips, so I've got my work cut out for me!

Another set of factors when learning something new within a skill set one has are proactive and retroactive interference ( thank you university 1st year Psychology! ). The proactive interference (my new learning being affected by my old learning ) is that I use so much rebound, I now have to control it in a different way to make this technique work, and it makes it challenging for sure. The retroactive interference I have to manage is that the old way I use rebound works very well for things, particularly playing a fast Jazz ride rhythm, so I don't want this new technique to affect what I already am happy with. Okay, back to the shed………

It's subtle, but I think this technique is starting to influence my sound. Because rebound is part of this technique, I find that in general I am playing more up off the drums rather than down into them and getting off the drum head slightly quicker. Not that I'm comparing myself to them at all, but the sound and feeling is more bright and ringy like Buddy Rich or Louis Bellson and I'm digging it a lot!!!

A couple of weeks later. It's coming along slowly. But then Guelph fine drummer Sam Cino posts this!!!!!!!

Mr. Montagner has really mastered this, and without using his fingers!!!! Also, he shows a lot of other great techniques. I think as far as a lot of this extreme technique stuff goes, I'm most attracted to the Brazilian take on it because it always seems to be about representing the music. Okay, back to the drawing board…...

Posted by Ted Warren at 3:50 AM No comments:

Charlie Watts and the Art of Simplicity

There are no coincidences. Just before Charlie Watts' death, I had been trying to capture Phil Rudd's feel on "It's a Long Way to the Top" and failing miserably. I was also cooking up a typically brainy/complicated bunch of exercises. Then I found out about Watts' death, and it's made me really think about simplicity and directness in music, two things Charlie Watts was brilliant at.

Firstly, anyone who thinks that anyone could do what he did doesn't know much about drumming, or music, for that matter. Anyone could probably technically manage the notes, but very few can make it feel that beautiful and swinging. And playing without artifice and flash ( an increasingly rare commodity ) takes patience, skill, lack of ego, and a lot of guts!

I didn't denigrate Charlie's playing when I was younger, but I also didn't appreciate it or understand it either. I have no doubt the Stones wouldn't have lasted nearly as long without his steering their ship. Even his lack of interest in most of the Rock Star trappings kept him on course to play beautifully and consistently from the early 60s to his last gigs with the band in 2019.

I met Mr. Watts once at the Montreal Jazz Festival. He noticed my cymbal bag and I grabbed his hand and shook it, saying " Hey Charlie Watts. I'm a drummer too. I've got a gig tonight!", and then rode up to my hotel room in a later elevator because I felt so foolish about what I'd said. No matter. Even if I had been the coolest I had ever been in my life, I still wouldn't be half as cool as Charlie Watts was every day of his.

Thanks so much for the music Charlie, and safe journey.

UPDATE: I have seen a lot of posts lately making a big deal over whether Charlie was a "Jazz Drummer" or a "Rock Drummer". I really think what he did was way beyond any sort of style. Check out this article in The Guardian , especially the part where Max Weinberg talks about bringing Joe Morello and Mel Lewis to see the Stones. Both Morello and Lewis realized Charlie was great at playing the drums appropriately and kicking the band, in other words, BEYOND STYLE!!!!

Posted by Ted Warren at 7:49 PM No comments:

Just got the terrible news that Charlie Watts has passed at the age of 80. I will do a feature on him and his work in the next few days. Rest well sir, and thank you for all the music.

Posted by Ted Warren at 9:52 AM No comments:

Couple of beats I cooked up using broken doubles. First in the RH with backbeats on snare, then the broken double is with the LH between HH & snare. HH on all 4 beats w/ LF in both.
I call them Tony Punk beats because they feel like they have a lot of attitude, just like Tony! :)
Posted by Ted Warren at 3:27 AM No comments:

Fantastic! Mr. Copeland explains the process in which a lot of those classic Police drum tracks were recorded!
Posted by Ted Warren at 2:23 AM No comments:

This past weekend I had 2 gigs booked (which turned into 3) They were all out of town. (Including a last minute replacement job in Toronto, which is still almost an hour from my place.)

Now, there are some issues with these performances that in the past  I would have complained about , including:

-the sound. First gig on Friday night was on a very boomy room, so it was challenging to not have the drums over balance everything. Ironically, the second gig was outside so the sound disappeared. :)

-the driving. Within 2 days I probably spent at least 8 hours in the car.

-the shlep. I needed to bring my drums into 2 of the gigs and the load in on the first one was quite challenging….( The last minute replacement gig had house drums, but I had to bring my drums inside because I had no time to drop them off between gigs.) Speaking of which……….

-I got to the replacement gig w/ only about 30 minutes before we started. By my standards, that's cutting it pretty close.

-I got caught in a traffic jam at midnight on the way home because of construction.

But you know what? I have felt was GRATEFUL! Let me count the ways….

- I got to play with a bunch of great musicians (including vocalists) that are great at what they do, listen carefully, and are lovely souls to hang out with.

-The gigs paid between good, and very good. No complaints there either.

-The audiences were very warm and appreciative.

-The staff and organizers of all the gigs treated us with kindness and respect.

-my new (for me)  Premier snare drum sounds and feels killer!

-I got to play drums with real live musicians again!

UPDATE: TODAY'S THE DAY!  COME CHECK OUT SWITCHEROO TOO ( Dave Restivo- Drums, Rob McBride-Bass, Ted Warren-Piano) on a livestream from Silence in Guelph. 8PM-EST Donations made via e-transfer or PayPal to twarren@gto.net

Posted by Ted Warren at 2:00 AM No comments: 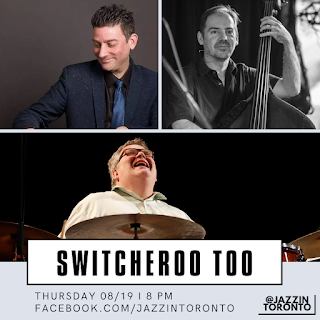 I'm afraid where ever one goes these days, one finds FAKE NEWS!!!! Now, it is true that  David Restivo, Rob McBride and I are playing trio in a streaming only concert from Silence in Guelph via the jazzintoronto page. What's FAKE NEWS IS THIS PIC BECAUSE DAVE is going to be PLAYING DRUMS and I'M PLAYING PIANO!!!! Come witness the fun, laughter, tears, and potential carnage this Thursday Aug. 19th at 8PM EST. Donations via paypal and e-transfer accepted via twarren@gto.net
Posted by Ted Warren at 9:39 AM No comments:

DEXTER!!!!!
Got into him in high school and felt like I "got it" immediately. That big sound. His laconic way of walking, talking, AND playing!
Here he is with a fantastic band in Europe. Tootie Heath smokes the whole set, and it's interesting how he plays on a lot of tunes that were recorded with other drummers, and makes them his own!
Everything that's great about music, and nothing that isn't! Enjoy!
Posted by Ted Warren at 4:02 AM No comments:

Hey Folks, we often see a lot of transcribed drum solos, trades, and grooves online. By transcribed, I mean the performances are written down in musical notation. While transcribing can sometimes help us analyze material and help to remember it or show it to others, it's not without it's drawbacks. I have always had the most success with "lifting" drum material, meaning I learn it by ear, then put it on the drum set. There are many reasons I think this is superior. If we leave the written page out of the process, we tend to learn it in a deeper way, and it tends to stay in out memory a long time. Also, the more we develop the ability to hear something on a recording and transfer it to the drums with no intermediary steps, we start to be able to move from our ears to our hands and feet much quicker.
Here's a great example of something I recently lifted. It's Philly Joe Jones trading 2 bar phrases on the tune "Gnid" from Tadd Dameron's Mating Call. It's cool in so many ways. Philly starts the trading. It's short because they are short phrases and they only trade on the first 2 As of the tune. Best of all, none of what Philly plays is super fast or difficult, just wonderful examples of the great swinging vocabulary he had. :)
So, it's  actually only 8 bars of material. Learn it by ear, and then put it on the drums, I guarantee you'll get a lot of good out of it.
Posted by Ted Warren at 2:24 AM No comments: