Check out my costume……. 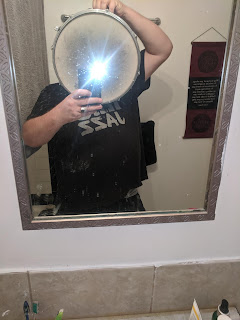 I'm a drum head!
Okay. Terrible jokes aside, I stumbled onto this DeJohnette interview. Wow! I love how he views piano and drums as completely related. Or drums and tap dance. Or drums and life! Such a intelligent  and creative person. Great advice at the end.  So much to learn….

Posted by Ted Warren at 4:55 PM No comments:

Hey everyone,
Here's a concert from awhile back with John Tank's quintet at the Registry Theatre. Sorry that some of the audio is out of sync with the images. ( Why oh why in this day and age does this still happen? )

The video is an hour and a half long so, unless you're my Mom, i don't expect you to watch the whole thing! :)

Hey all, here's a brush pattern in 3/4 using my "brush flams" concept where one brush runs over the other. Here's the notation..... 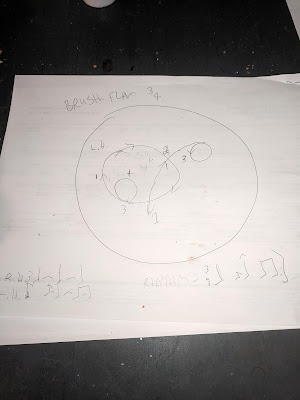 Can't make heads or tails out of it? Good! Me neither! It's probably best to just look at the video......

Couple of things, please ignore my messy coffee table and Max the curious puppy. Also, for the brush flam on beat 2 I find it easier for the left brush to run over the right, but that may not be the case for everyone. Okay, Have fun!

Posted by Ted Warren at 8:07 PM No comments: 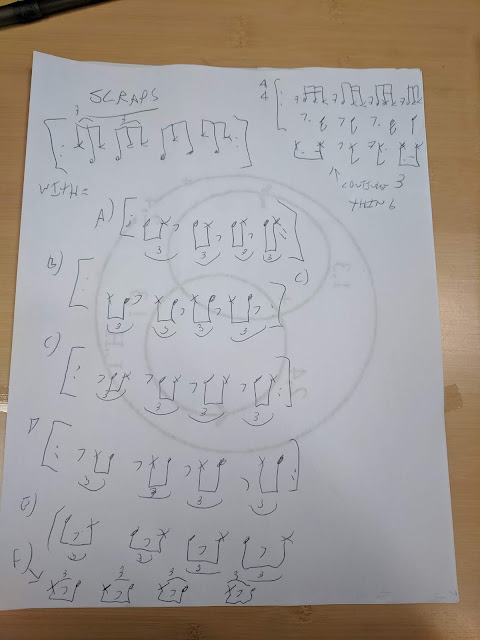 What is this, looking like the proverbial dog's breakfast? Just some stuff i was working on the other day. Let me try and explain. In the top left corner is a 12/8 beat written out between the hands and the RH plays the bell pattern and the LH fills in the rest of the triplets. The rest of the page are possible BD/HH patterns to play with it. On the top right side of the page is an unrelated idea of playing the last 3 16ths of every beat with LH on open snare then the next 2 strokes w/ RH playing a stick shot. ( RH on left stick ) with a salsa BD pattern and a 3 16th note HH pattern.
I KNOW this is super hard to read, but that's good for us to do sometimes.
I'll leave the final word on this to BartholeMEW MURRay Warren. Bart, what do you think? 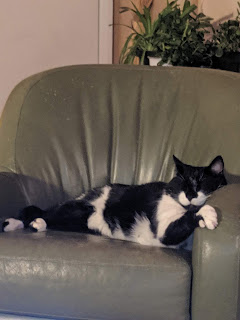 Scraps? More like CRAPS! Now, don't bother me! I was napping!!!!

Well, there you have it. Everyone's a critic! Until next time......

What can you say about Sonny in his prime, especially in a trio format? Here he is at his most ferocious, throw-down, stream of consciousness best, aided beautifully by Gilbert Rovere on Bass and the incomparable Art Taylor on drums! Fantastic!

Hey folks,
I know, I know, modern laptops don't have a CD port, vinyl is supposedly coming back, and nobody wants to pay for music anymore! despite all this, I am offering 2 recordings I have played on for sale Ted's Warren Commission's " The Great Regina Pizza Debate" and "Two of Clubs' by Broadview. 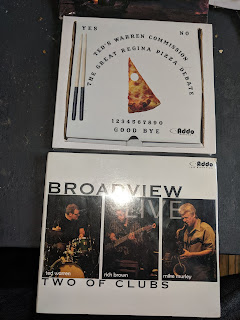 They can be obtained directly online through  CD Baby or you can buy them from me. if you order them from me, you pay whatever you want to! ( Within reason ). The within reason part is you have to pay at least enough to pay shipping if I'm sending it to you. Otherwise, if you see me at a gig and you offer me $2, I'll take it. If you offer me $10,000 , I'll take it. It's just that I feel these are good recordings and I don't want to be eventually buried with them! :) Good talk!

P.S. Please direct all inquiries about purchasing CDs from me to twarren@gto.net. Thanks.
Posted by Ted Warren at 11:19 AM No comments:

As someone who came up in an era when the "studio" musician was the pinnacle, versatility was seen as a great attribute. ( Truth be told, when I was in high school, I had planned to become a studio player, and then got super into playing Jazz. ) To be clear, it's important to be able to play a bunch of different styles and feels effectively, but I think it's also important to eventually decide on what sort of player you're going to be and be committed to that. When I was in university I was trying to play Rock like John Bonham, Pop like Ringo, modern Jazz like Elvin Jones, etc. But, if we look at any of those instantly recognizable players, they are known for doing very specific things. Bonham possibly could have been a great brush player, but that wasn't what put him on the map!
It's interesting, getting back to the idea of a studio player, because even someone like Steve Gadd, who was seen as the ultimate studio chameleon, actually has a very recognizable style. In fact, I think Gadd almost singlehandedly created a style where the studio influenced every other style of playing he did. Studio influenced big band, studio influenced small group jazz etc.
Sorry that was a slight tangent!

Anyway, I think partially what I'm getting at is, while you're working to be the best musician you can be, accept that there are going to be things you are going to gravitate towards, both physically and musically. Don't be afraid to embrace those, and especially to cultivate the scene that contains the music that fills your heart and imagination!!!! If you want to play Blues, meet the people in your town that play that music! If you want to play Death-Metal, find other death metal people, jam with them , AND SEE THEIR GIGS!!!!! Of course, you can try and cultivate all the scenes in your locale: just be aware that you could spread yourself too thin. Also, realize that where ever you are, people will tend to pigeon hole you, depending on what they've heard you play. I tend to do more Free Jazz-type things in Guelph, because I joined a freer band in that city, and we've played a fair amount of local gigs, whereas in Toronto I think I'm perceived as more of a straight ahead ( and possibly big band ) player. Please note that other's perceptions of you  may have nothing to do with how you feel you play a certain music. It's just good to be aware of it.

I also want to note that, just because you may never play a certain style of music, doesn't mean you won't get a lot out of studying it. i have spent a fair amount of time practicing "World" styles from Cuba, Brazil, and Western Africa etc. The closest I have come to playing any sort of gig in a non-North American style was with a Chilean singer, and she fired me before she even heard me!
So, work on ALL music. It's good for your brain. But don't be afraid to pursue the music that feeds your heart and soul most! Also be aware that in any music style that you view as just "my R n' B bag" for example, is never going to be as true and authentic as someone who has dedicated their life to that particular music! People who "discover their Jazz side" after they realize they are middle aged and haven't become a big Rock star a special pet peeve of mine!

Speaking of Gadd ( again ) . Let's dig his version of a Mozambique on "Late In The Evening ). He      ( and his leader in this case,  Paul Simon ) is a great example of getting lots of input and influences and filtering it out through your own style! :)