Hey all,
A quick post today. I have to learn 3 new tunes on piano for a gig on Thursday so that's basically all I'll be doing until then. Fortunately I'm playing the second set of the same gig on drums which will be like a vacation after that.
Anyway, I recently remembered an experience I had in the early '90s. I was playing the first set of a 5 night run (those were the days) at the dearly departed Top Of the Senator with Mike Murley's group. There was a small but enthusiastic crowd, the band was excited to be playing together after a hiatus, and it felt like we were firing on all cylinders right from the beginning. We took our first break and headed to the bar, feeling pretty cocky about what we had done.
.....Then this came over the PA system.
We all looked at each other and said something to the effect of
"Well, yeah I guess we played okay."
It's important to remain humble.
Talk to you soon.
Posted by Ted Warren at 3:40 PM 2 comments:

Hey,
I wanted to post a couple of videos of a drummer I recently became aware of, Nick Stabulas.
Here he is with Lennie Tristano on a tune based on "Out of Nowhere".
And here's the same group ( with Warne Marsh, Lee Konitz, and Sonny Dallas) playing "Background Music" (All of Me changes). Check out the phrasing on Tristano's solo, WOW!
Great playing. Inventive , swinging. It's interesting. As much as I love Tristano's music, I find Stabulas seems to be allowed to play more aggressively than his drummers usually do.
Nick Stabulas was playing into the '70s when he passed away in an automobile accident. Definitely our loss he was taken away before his time.
Thanks for stopping in......
Posted by Ted Warren at 8:46 AM No comments:

Hey folks,
Those of you that have followed me have probably noted that I've often wished for more linear vocabulary on the drum set. I have decided to address this. One way to achieve this might be to go through one of Dave Garabaldi's great books, or to learn some Steve Gadd grooves and the like. I decided, however, to come up with my own solution to this. I think it's an important part of the creative process to approach difficulties and limitations on the instrument in an individualistic way, and hopefully that's what I've done here.
It's pretty simple, I first took doubles between the hands and inserted the right foot in place of each of the different strokes. I'll use "F" to signify the bass drum.
1. FR LL
2.RF LL
3.RR FL
4.RR LF
Here's an example of me playing this:
Then I did the same thing except inserting the hi-hat instead of the bass drum. Here's an example of this while playing a samba pattern with my right foot:
Next I did the same thing with paradiddles:
1. FLRR LRLL
2. RFRR LRLL
3. RLFR LRLL
4.RLRF LRLL
5. RLRR FRLL
6. RLRR LFLL
7. RLRR LRFL
8. RLRR LRLF
For this one as well you can use either bass drum or hi-hat for the F part.
Finally, you can keep a pattern of paradiddles going and assign one limb to interrupt the pattern to play a melody. Here's me playing paradiddles between the hands with the melody to "Sonnymoon for Two" with the bass drum.
For some of you that have worked extensively on funk playing, some of this may seem basic, but for me it's a matter of working on one of my weak areas.
Thanks for stopping by!
Posted by Ted Warren at 12:18 PM No comments:

Hi-ho (as kermit the Frog would say). Today I've got a little brush thing that I'm digging lately. 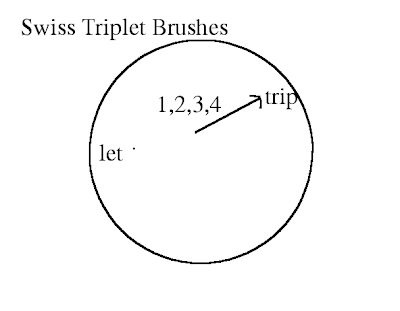 I haven't labeled which hand is which because I think it's good to be able to play this off ether hand. To start with well play the first 2 strokes of the triplet with the right hand. Play the first stroke as a dead stroke and stop the movement of the brush, then for the second stroke keep your hand on the drum and sweep away from yourself, using as much of the brush surface as possible. Finally, tap the 3rd triplet with your left hand. To play this lefty, reverse the above instructions.

Here's some video of the lick, both righty and lefty, and then playing it as triplet doubles. I promise I'll get a stand for my camera soon so I can do this at the drum set.
Thanks!

Posted by Ted Warren at 8:51 AM No comments:

No time, no blog! My apologies. Had a little health issue but am feeling better now. I'm going to post some things I've been working on but for now let's dig Ferenc Nemeth. Ferenc is best known for his work with Lionel Loueke's trio. I really love how Fernec plays these great linear patterns in an acoustic setting. I really, really love, how, even though he's got tons of chops, he's quite happy not to use them unless it serves the music. Check it out! Killing!
Posted by Ted Warren at 6:44 AM No comments:

Music and its Formats

Hey everyone,
I'm probably going to get some heat for this post but please remember, this is just my opinion.
What got me thinking about this was Record Store Day being celebrated last month.
Now, I'm advanced enough in years to remember frequenting record stores as one of the only ways to obtain music in my formative years. I have great memories of visiting record stores.
....I also have great memories of using dial phones and typewriters but I don't think I'd celebrate a day dedicated to either of these things just as I don't observe record store day.
I visited a record store recently and the prices were horrendous. I couldn't find a single title for less than $20. Part of my belief the whole record industry collapsed was that the prices were unreasonable. What's the average price of a full length recording on iTunes? About $9.99. Now what about sound quality of digital vs. vinyl? Vinyl wins hands down. But digital is the most major step forward as far convenience is concerned and I'm certainly willing to sacrifice some sound quality if I can keep all the recordings I own in my BlackBerry and take them wherever I want.
I had a very interesting conversation a while ago ( watch out for a name to get dropped on your foot, ouch!) with Dave Holland before a gig. We were talking about digital and how he was a fan of it. Some one asked him about how to download cover art ( this was in the early stages of iTunes) and he replied he'd never bothered. Now he has to have 10 years on me so he also grew up in the era of records being the only format, but he didn't have any romantic notions about the LP anymore than your average 14 year old, or myself.
I think sometimes we think the search for the records is the music, or the cover art is the music. or the sound is the music. But as far as I'm concerned, only the music is the music.
Now. while I'm standing by waiting for the hate mail and rotten tomatoes, here's a Charles Ives piece that master musician and birthday boy today Reg Schwager hipped me to.
Amazing.
Posted by Ted Warren at 9:16 AM No comments:

Labels: The medium isn't the message.

Hey,
I'm going to talk about a something that I've found quite helpful with playing metric modulations etc. I call it Groove Surfing and it basically involves playing along with common time signatures (e.g. 4/4 and 3/4) but playing in odd groupings rather than the originally presented feel. This came out of my wanting to use odd groupings (septuplets, quintuplets, and the like) more in my playing while still hearing the original time feel and being able to go back to it easily. It's pretty simple. Just play along to any music where the the pulse is stated very obviously. Most classic Rock or Dance music works well. Then just add whatever grouping you're working on. You can play it as a beat or fills, just on the snare drum if you're having trouble hearing it, or any combination of the above. To give us some possibilities, here are some ideas I've been working with lately.

Okay, some explanation is necessary. None of these examples use all four limbs. I wanted to use some examples where the instrument is orchestrated. In example 2 I like playing it with only left hand and right foot and doing the opposite for example 3. Now, what about those question marks, has Ted finally flipped? Nope. What I'm doing is purposely not telling anyone who reads examples 2 and 3 (myself included) where I should play on the question marked beats. There is no "correct' place to play at those points. In fact, try to play the question marked parts on a different part of the kit each time you play it.
Now here's me playing along with the radio using each one of the examples. I hope Katy Perry's (or whoever's) lawyers don't get after me!
Posted by Ted Warren at 7:22 PM No comments:

Hey,
With everything going on out there in the great big world (including Ari Hoenig's great band on the live feed from Smalls) I thought I'd just mention a couple of things I do to help me listen and concentrate, especially before gigs.
One of the main things I do is to listen to music, any music (the radio will do nicely) and focus on what is usually the most difficult thing to hear, the bass. I also:
1) Try and predict where it's (the bass line or root movement) going to go next,
2) Sing along. You don't have to sound like an opera star, but try to be as accurate with the pitches as you can. This helps everything!
3) Notice the relationship between the bass and drums. If it's a Pop, Rock, or R n' B tune do the drums play rhythms in unison with the bass, or do they both go their own way? If it's a Jazz tune, do the bass and drums play the time in the same place (in the middle, top, or bottom of the beat?) or in different spots?
I find doing some of these things helps my ears (which at this point are the part of me that I worry about my chops the most) and gets me ready to listen.
To close here's a great example of Bass and Drums playing counter to each other in a tune.
Bowie's classic "Ashes to Ashes". Very cool video too!
Posted by Ted Warren at 7:32 PM No comments:

This has been an unpaid political announcement.....