What I learned from Sugar Rush

Like a lot of people in these crazy times, I have spent a fair amount of time watching Netflix lately. (Hey! You can't practice ALL the time!) Anyway, one of the shows my wife hipped me to is "Sugar Rush", a baking contest show. I gradually got into it, which is doubly ironic since I've hardly ever baked and haven't eaten anything with refined sugar in it since last April! 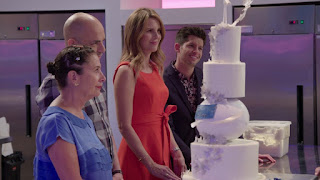 Whoa! Keep this SUGARy cake away from Ted or he'll really start RUSHing!
Anyway, I started thinking about how baking, like music, and many other pursuits that were invented before the start of the current century, are not instantly gratifying or can be learned overnight. Baking, like music, requires a lot of trial and error and one won't be successful with every outing. However, the failures seem to be what teach the practitioners the most! Also common to both disciplines is that knowledge, experience, and an ability to grapple with any eventuality is something that develops over time. There do not seem to be any shortcuts, and patience is an important requirement.
Apparently, instrument sales and rentals have greatly increased since the COVID lockdown. it is my sincere wish that people starting to play be patient and enjoy the learning process. If one sticks with it, there are so many rewards! Or you could stick with baking and have tasty things to offer friends and family. Let's hope that soon will all be singing this song, a la Ernie!

Not a very catchy title for this post, I'm afraid. In a nutshell the idea of this is to take one sticking and to not voice it in the standard way one would utilize that sticking. ( Check out the video for a more concrete explanation). Speaking of the video, a couple of notes. 1) When I was trading with myself, I took the Elvin "Sometimes my 4s take a little longer" concept and switched to 8s.  2) Also sometimes instead of using the RLR sticking, I was doing something more like RRL. At least you can be assured I don't spend months rehearsing these things to make them super-slick! :)
Anyway, good luck and have fun!
Posted by Ted Warren at 3:21 PM 6 comments:

And by listen, I mean everything he plays AND says. I have never heard a more intelligent discussion of click tracks and their effect on music and musicians. Also, the playing near the end of this (part 1 is great as well) is so beautiful. The man really does create magic with the drums! :)
Posted by Ted Warren at 9:30 AM No comments:

Ken in the Wascana Park Bandshell

This is a short post but I wanted to relay an old memory that came to me the other day while  I was practicing.

In the mid-80s, after getting my Diploma in Jazz Studies after 2 1/2 years studying at St. FXU, I moved back to Regina Saskatchewan and tried to be a working musician as much as I could. Now, I was 20 years old, and I had leaned just enough to think I was pretty hot stuff, that there wasn't much an older musician could show me, and I was easily the best drummer in Regina at this point! (Yikes! I know, right?)

Anyway, I don't know who else was on the gig, or what it was for, but I have a memory of playing in the bandshell at Wascana Park with bassist Ken Coffey. Ken and I worked a lot around that time, and although he was much more experienced than me, he generally appreciated my youthful enthusiasm, and put up with a lot of the stupid b.s. that can often accompany it.

So, we were on the last tune, and I remember it was an up tempo swing number. About 1/2 way through, Ken comes over to the the drums and says, "I can't tell where 1 is". He probably said this 3 more times over the course of the rest of the tune. I want to make clear that while he said this, he didn't seem angry or upset. In fact, I remember him looking slightly bemused. We finished the gig, and I don't remember there being any weird feeling or anything between Ken and I, just the thought inside my head that Ken just didn't get how hip I was……..

There were SO MANY lessons in this that I was too ego-based at the time to learn!

I can't remember what I was (or wasn't) playing, but I'm sure Ken was right! And even if I had been doing something oh so clever and modern (which I wasn't) ], it doesn't matter if you've lost the bassist! HELP A BROTHER (or sister) OUT!

What I'm pretty sure what was going on was I WAS MORE CONCERNED WITh SATISFYING MY EGO THAN MAKING THE MUSIC WORK! Talk about messed up priorities and a missed opportunity. Not only to play the gig better,. but to learn from my folly!

You may surmise I'm looking back on this experience, cringing and feeling ashamed. Actually, I'm not. I'm thinking back on how young and experienced I was in those days ( as a drummer, musician, AND human being) and feeling grateful I've learned a few things since then.

Remember, any honest criticism of what you'er doing has the potential to make you better, and it's a gift!

Cheating? This isn't a card game!

Once again, I am inspired to RANT! I recently viewed a demonstration on playing up tempos with brushes, and it had some good advice on how to develop this skill. My problem was that the person doing the demonstration said this was a way to play fast tempos without cheating. He never explained what he meant by that but I assume it's using two hands to play the ride pattern, even though many great drummers have done this. (Philly Joe would be a prominent example.)

But this is cheating, apparently….

So what happens when one "cheats"? Do the cops go into the recording studio and issue an ordinance for "2 hand ride usage"? Do they have a seance at your gig (when there is one) and Buddy Rich's ghost takes your snare drum away?

Okay, I'm being facetious, but I really don't understand this mode of thinking at all. I feel the end justifies the means when you're playing and the end is how it sounds and feels. Truth be told, the feel and sound of this person not "cheating" didn't kill me, and it could be that they could create a better sound and feel using 2 hands. Perhaps by dogmatically sticking to a technique as some sort of athletic display one might be "cheating" the listener out of the best feel and sound possible!

I've probably mentioned this before, but I have arrived to a point where I want to get the best possible feel and sound out of the drums with the least possible effort. If that means me lounging in a Lay-Z-Boy           ( Pronounced Lay-ZED-Boy!) while I can do everything I want to at the drums, I would call that an achievement, rather than a weakness! 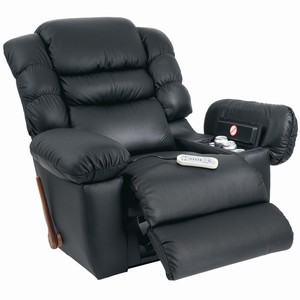 Ted, your drum throne just arrived!
So, in conclusion, certainly work on your technique, but avoid "jock drumming" attitudes! :)

Posted by Ted Warren at 9:00 AM No comments: 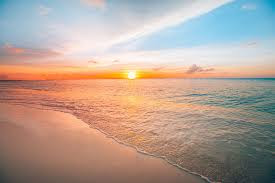 We are coming to the end of a very challenging year for everyone, musicians included. Even before the pandemic hit, streaming was taking revenues from more traditional forms of music purchase, clubs were closing, and there were more and more talented people around for fewer and fewer gigs. There has been a great increase in online music performances, but people usually didn't have to pay for these, so it's debatable whether this has improved things or not.

There is a possibility that the sun is setting on not only my own career as a professional musician, but for the culture of live music in general. To be clear, I am not wallowing in this, just observing a possible passing of any era. I realize that in my 40+ years of playing, I have had many opportunities, met many people, and traveled many places, and feel very fortunate to have done so .I will always be involved in music, but my ability to survive financially from performing has decreased greatly in the last few years, and I am resigned to the fact that I will need other means to survive that may not involve playing , composing, or recording. Again, I do not feel bitter about this. In fact, I feel grateful for the many opportunities I've had. I do, however, like many of an older generation when looking to the future, feel sorry for all the younger players and the situation they are in. I also regret we haven't done more to leave them in a better place. They will, though, find ways to create no matter what, because that's what we do and are driven to do.

So, just for today, let's play, listen, write, and create, and be grateful….for the music itself.
Posted by Ted Warren at 12:28 PM No comments: