Hey all,
This is going to be mainly a pizza related post so bear with me.
Anyone who's read this post at all will know my preference for pizza from the prairie provinces of Canada but I also appreciate the regional differences in this particular food. For example, the sauce on pizza from Nova Scotia tends to have spicier sauce due to the Lebanese influence in that part of the country.


To that end, I thought I'd mention a very good local joint in Guelph, Victoria's Pizza. 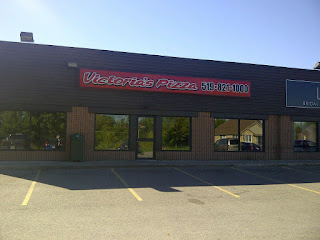 The sauce is good, it's very fresh and they don't skimp on the cheese.

One of the great things about buying pizza in Central Canada is what I call "slice culture". Simply put, pizza is sold by the slice. For some reason, out west you have to buy a whole pizza most of the time. This is a) more time and calorie commitment and b) a lot more expensive.

Another weird regional difference is that in Ontario and Quebec they putting the toppings on top of the cheese whereas in Saskatchewan they put them under, inside the pizza. Which I guess makes then "middlings" rather than "toppings". No matter.

Also worth mentioning as a great example of "central' pizza is Amelio's which has the added attraction of being run by identical twin brothers who look incredibly like (Montreal born) pianist Paul Bley!


This is a performance of Ari Hoenig at a clinic which I lifted some ideas from that will be in a coming post. Enjoy!