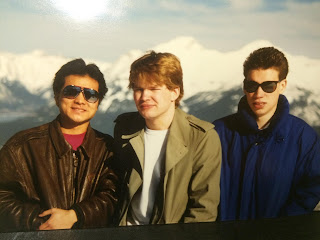 No, I haven't discovered a machine that will make my time better. ( Although that would be awesome! )

In 1988, a big band of young Canadian musicians was assembled to play in honour of the winter olympics in Calgary. Rob McConnell led the band and by a recommendation and other flukes I was invited to be involved. Many long term musical relationships were formed from that experience. ( In fact, this week I'm doing 3 gigs that involved both bassist Jim Vivian and Saxophonist Perry White, who were both in the olympic band with me. I also eventually worked with the Boss Brass after that early meeting with Rob. It's sad to think that far fewer of these type of opportunities exist in this current political and economic climate.

I had forgotten that the band was recorded and recently I was sent the mp3s of the performance. It is indeed strange to go back in time almost 30 years. It is, however ,fun to hear how I played the time, the way I tuned, the sorts of ideas I was playing, etc. I hadn't even recorded professionally yet at this point so to say I was green and rough around cannot be overstated. That said, there's a fun energy and enthusiasm that only a 22-year-old that thinks he has something to prove can provide.

The 2 mp3s are about 45 minutes each, so again, unless you're my Mom, I don't expect you to plow through all of it! It is, nevertheless, a nice capsule of a time gone by and of Rob McConnell's wacky sense of humour. Enjoy!