Hey! The original title for this post was " 2 Brush fills and 7 beat thingy". Not the catchiest moniker!
I don't know what it's like for most musicians, but I stumble onto fragments of ideas all the time. I often jot them down on whatever is handy, so I can remember them for the next time the drums and I go dancing. Here's a current example.... 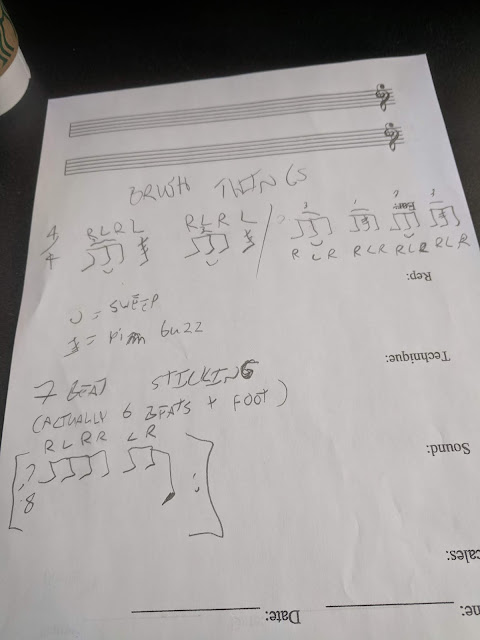 Oh yeah! There's the "natural font" for ya! I didn't say it was pretty!

Anyhow, here's some explanation. The first two things closer to the top of the page are brush ideas alternating a sweep and a "rim buzz" in the left hand. The latter technique doesn't have a name, as far as I know, and " rim buzz" certainly isn't a good one. It involves hitting the drum"s rim at almost a 90 degree angle and then bringing the brushes bristles down to the drumhead as it bounces. Way easier to see and to play than to explain. Don't worry, I made some video. The second brush idea ( sorry, both are in 4/4 but I think the end of this one got cut off ) is using the same alternating technique in the left hand except as the middle note of a triplet. Sort of a "Purdie Shuffle meets Papa Jo " perhaps? Anyway, you could use both ideas as beats, although they strike as more applicable as fills. I think it's just a matter of taste.

Okay, here's both of the brush fills demonstrated....

The other idea is related to the 2 brush fills in that it occurred to me at the same practice session and therefore ended up being written on the same page. I suspect I subconsciously was thinking about a recent Four On The Floor post on something similar. As usual with this sort of stuff, the applications are myriad. Here's me playing the 7 beat lick in triplets with hi-hat on all the upbeats. I'm singing a blues to myself, although I end the idea a bit into the next chorus. I guess you'll just have to take my word for it!