Your Character Is Your Calling Card

So, I'd like to mention a recent incident that proves the power of positive character.

Enter exhibit A, no stranger to this blog or fans of fine musicianship, Jerry Bergonzi..... 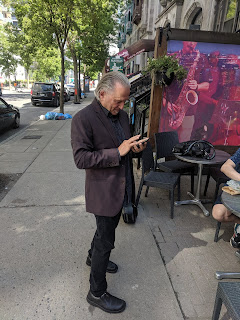 I have been extremely fortunate to have worked with Jerry along with Brian Dickinson and Jim Vivian  for over a decade now. As well as being a  fantastic musician, Mr. Bergonzi has always been a great example of how to be in the world. He isn't impressed by money or fame, he is impeccably honest and respectful of others, and it's always about the music, which he loves. This past  summer Jerry was offered a gig in the Montreal Jazz Festival.  He was given the chance to choose anyone to work with him, and I don't think it would be out of line to suggest the festival probably hoped he would choose some big, well-known players to accompany him to help promote the event. Instead, he insisted that he play with Brian's trio with Jim and I. Why? Well, he mentioned how much work Brian had created for him in Canada over the years, and he thought  it would be fair to give Brian another opportunity. I believe he also realized that with Brian's trio he would get high level accompaniment, with no egos or bs, and that we had played together a lot so there would be a band concept, unlike playing with a bunch of big names he mightn't have worked with previously. This is class folks! And the thing is, this is not an unusual story about Jerry. No one who has worked with him ever has anything bad to say about him, because his ethics are impeccable! THAT is the kind of reputation we should all be striving for!

Here's a short video of Jerry explaining a way of using triad pairs. It's a little advanced for where i am harmonically, but I believe it's important to have some thing to work toward.

So, in conclusion, behave like Jerry Bergonzi and the world will be a much better, more moral, and way hipper place!