One of the good things to come out of social isolation is that the online educational sources for all kinds of music have gone from a Plethora to a Super-Plethora! One of things I had enjoyed is drumming great  Ferenc Nemeth's online Q & As/practice sessions.  I love how he plays metric modulations so seamlessly! It made me realize that often when I do modulations, I tend to modify the original lick to make it easier or more logical to play in relation to the original tempo. For example, I might try to avoid playing the hi-hat in it's exact place in the modulation if it's on the middle triplet or something. So, I'm trying to work on this…..

In the first video, I'm playing only hi-hat, while singing the melody to Dizzy Gillespie's "Ow". I sang the bridge to "I've Got Rhythm" in the B section because either the bridge to "Ow" is just blowing or I've forgotten it. I start in 1/4 time, go to 1/2 time, then playing the time off the dotted quarters, then to the actual tempo, time off the quarter note triplet, and finally (barely) double time!


Note that it's a little loose in spots, but the important thing is I'm keeping the original tempo in my head, so no matter what happens I can find my way back. This principle applies in ALL modulation situations!

Here's the same idea but this time I'm starting by playing the original tempo, I'm spending less time on most of the modulations, and have also included a modulation that's using 2 & 4 as the "phoney" quarter notes. I believe I stole that from Jeff Watts…….

In the next example, I stay in the modulation (or maybe this would be described as just a displacement?) for awhile. I am singing the Mingus tune "Nostalgia In Times Square/Strollin'" and that is the actual part of the bar I'm in. Written out in the crudest manner possible, this is what my RH is doing….. 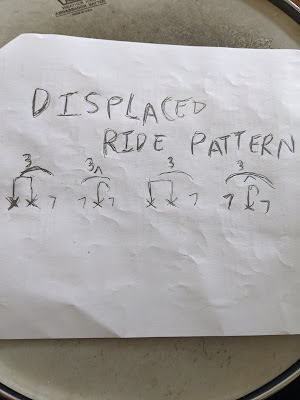 …And here's the video
Admittedly, this is a challenging one to keep one's place in. Even now as I'm listening to it, if I don't concentrate very hard, I'll move it back by an 8th note triplet!

The next few videos show me playing modulated beats while singing tunes. (Sorry that the singing is hard to hear in some cases.) Note I am taking very simple beats that I don't have to think about, AND are very recognizable in their original form. Also, when I modulate them, I am trying to keep the voicing, spaces between notes etc. exactly the same/

Here's "Solar" again with more of a Hip-Hop feel….

Now, in a Mambo

Finally, here's a displaced shuffle (similar to the displaced swing of earlier in the post, again moved by one 8th-note triplet) while I'm warbling a blues head.

Obviously, there's a ton of musical situations these sorts of ideas DON'T belong in. Use sparingly, and always support the music!
Posted by Ted Warren at 2:03 PM