Hazards of "The Grid"

Lately, there has been a great deal of convergence for me, as happens so often in the world of Music.

Firstly, we lost great musical artist and visionary Milford Graves, just after the loss of Chick Corea. I certainly don't know all of Chick's recorded work, not by a long shit, but Mr. Graves' work has been seriously under appreciated by me, so I set out to work on learning all I could about him. A great place to start is "The Full Mantis", a documentary about him released a few years back. Here's a preview, and I'll talk more about the film later.

Another great work of his is the collaborative drumming recording "Pieces of Time" with Kenny Clarke, Andrew Cyrille, and Famoudou Don Moye. There are so many great things about this recording (it's not on youtube, but you should buy it anyway!). Some of the great things are, hearing Kenny Clarke playing in such an abstract setting, and trying to pick out all the drummers individually ( I do better with Clarke and Don Moye than with Graves and Cyrille, so I obviously have a lot more listening to do! ). What's also wonderful is the amount of pure music being made! This is no mere drum wank!

Another converging piece of information for me was something the great Dave O'Neill said to me in a recent phone conversation. I was talking about how a lot of times when playing with a drum machine or metronome, the interpretation of the time doesn't get to be as loose (in a good way) and free as it is when people are just playing in the air, without a net. Dave then said " That's because, in the case of working with a machine, the time is seen as a grid". Bingo!!! That's it. Let's even look at this concept visually…. 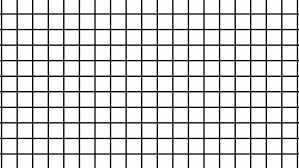 So, I we look at a grid, everything is the same distance apart, and there are definite spots where the horizontal and vertical lines meet up. So, this pattern is great for making things more consistent. For example, matching sound to images exactly, or even more basically, creating consistent intonation on a guitar using frets. What grid patterns are not so good at, is leaving openness for expression, because anything outside the convergent points will seem "wrong". E.g. Playing quintuplets along with a metronome playing quarter notes.
Please keep in mind, I'm not saying there's anything wrong with developing the ability to play good solid time along with a machine. In fact, great Toronto bassist Rich Brown has an excellent series on how to do this effectively.

Obviously, this is something that every musician in this day and age needs to do effectively, but I feel we need to look at the time in other ways as well, otherwise we will be severely limited. What if sometimes we conceive of the time as waves, or the wind, or stars etc. The natural world has much to teach us about how to feel time and pulse (or no time and no pulse) in an organic way. Getting back to the Graves' doc, he describes (and plays) this so well. Interestingly enough, a lot of his ideas echo things that with Jim Keltner expresses in an interview I posted awhile back.

Now, fast forward to today where I was listening to a modern R n' B recording, and I couldn't help but notice how the guitar strumming along with the backbeat on 2 & 4, was a little behind. Now, this is the type of thing that's often great but, to my ears, it was the same amount of behind every time which means either, a) The guitarist was playing it along to a click, and was trying to be super consciously "expressive' or b) even worse, the guitar comp was "moved" to the same spot of the grid in the post-production process. I think in this sort of environment, the click has become the source of all the time and groove rather than a tool to be used (or not used) and the music suffers as a result.

Stevie didn't use any artificial time keepers on this. Does the time "wave" slightly at times? Yes. Is it unbelievably great in every way? YES!!!!!!!

In conclusion, don't just work on the grid of time; dive into the ocean of time as well!