Here's a very simple brush pattern but I'm using it to illustrate my concept that we need to be able to circle in ( R.H. counter-clockwise, L.H. clockwise) or out (directions reversed) with the brushes. Here's video of me playing a pattern with the the hands circling out, and for me it sounds and feels the best when I'm pushing the sound out this way.

Now here's the same pattern but I'm pulling the sound in because the hand's directions are reversed.

Finally, here's me playing both hands going clockwise, and then both going counter-clockwise. I also threw in some "brush flams" because making matching circles lends itself to this technique.

I know some of you are asking, "Why work on that many ways to make circles?". For me, being able to do this really increases flexibility. If I could only stick 4 eighth notes as RLRL, I would be pretty limited. I view the brush circles the same way. Work on this, and I think you'll find your brush playing really opens up.

Okay, PIZZATRON 2011.
I'm afraid I didn't get to the Copper Kettle so I'll have to wait on it until next time I get to Regina. I did go to to the Western Pizza location that Kelly Jefferson recommends, but found this instead: 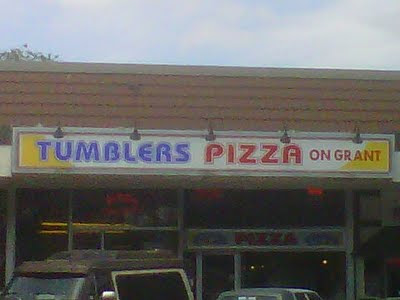 ...So it's not even a Western anymore. No horsey on the pizza box, nothing! After I took a few deep breaths I reminded myself I was on a mission and had to stay strong for pizza fans everywhere.
The pizza was good, no doubt about it but for me the sauce was not boss. There was way too much of it and it was too sweet. It's also $3 more for a small than at Houston's. I also went to the Chimney (River Heights shopping Centre) and it was quite good, although not in the same league as Houston or Western.
So for me it was Houston 1st, Ex- Western-Tumblers-Sovereign-Whatever-No-Horsies a close 2nd, and the Chimney a more distant 3rd. I would also add that all these were very good examples of Regina style pizza, and kick the poop out of any product I've had in the rest of the country.