The Drummers of XTC Part 3

In the third instalment in my series on drummers that have worked with XTC, I spoke with Chuck Sabo. Mr. Sabo is especially significant in that he is the last drummer to record with the band, the fantastic results of which are documented on Wasp Star (Apple Venus Vol. 2). Before we get to the interview, here's some biographical information about this musician's long and varied career. 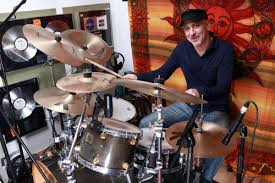 Chuck Sabo (Charles Edward Sabo Jr.) was born August 22, 1958, and grew up in Allentown, Pennsylvania, in a family of non-musicians. His parents supported his interest in and aptitude for playing the drums, and he began his career playing in cover bands in the Allentown area.

Sabo moved to New York City in 1980 at age 21. While taking drum lessons with Sonny Igoe he worked moving furniture to subsidize his music career. In the early part of the decade he made his first significant industry connections, recording his first major label project (1982's The Eleventh Hour)[7] with Tom Dickie and the Desires[8] managed by Tommy Mottola.

He also played in the early 1980s in New York City with the Comateens, and his stint in NYC ended after he recorded their final album, Deal With It, in 1984. After touring Europe with the group to support the album, he decided to stay in London.

He began his UK career being offered gigs with two bands, Decadence, managed by Mick Rossey, who was also managing Flock of Seagulls, and Glasgow band Talking Drums, who were managed by Miles Copeland. He went with Talking Drums and moved to Glasgow for a short time, but soon returned to London, where he played with a number of bands and became further known on the music scene.

In 1988 he was the session drummer for Étienne Daho's album Pour Nos Vies Martiennes. The following year he toured Europe with Daho.

Sabo played on Martyn Ware's 1991 British Electric Foundation album Music of Quality and Distinction, Vol. 2, which included recordings with Tina Turner, Chaka Khan, Terence Trent D'Arby, Billy Preston, and others.[9] In 1992 he played on Tashan's 1992 album For the Sake of Love, produced by Ware. He toured with Shakespears Sister and played on their album Hormonally Yours as well as Right Said Fred's album Up. In 1993 he was the session drummer on Take That's album Everything Changes. In 1994, while he was recording Marcella Detroit's album Jewel, its producer Chris Thomas arranged for Sabo to play on the last track ("Duets for One") on Elton John's Duets album. That led to sessions for The Lion King soundtrack, where Chuck played on "Circle of Life," "Can You Feel the Love Tonight," and "I Just Can't Wait to Be King." Sessions with Kiki Dee and Orchestral Manoeuvres in the Dark followed.In 1997 Sabo played on Natalie Imbruglia's hit Grammy-winning RCA album Left of the Middle and toured with Imbruglia supporting it.

The success of the Natalie Imbruglia project and others enabled Sabo and his then-wife Jeanette Landry to set up a home studio, where among other projects they wrote and recorded with singer Sally Ann Marsh, who was later signed to Jive Records. Her success led them to a publishing deal with Dalmatian Songs in the U.K. and with BMG in the rest of the world.

In 2003, Sabo performed on three albums that Brian Eno produced, Roy Orbison - 'You May Feel Me Crying'  On the Platinum Collection Album, The Pet Shop Boys, and 808 State  'Lopez'.

In 2007 he joined the drum faculty of the Institute of Contemporary Music Performance in London.In 2019 he released three singles, "This Cowboy Ain't Going Home," "The Politician," and "Keep Running Forever," in advance of his forthcoming debut album Running the Human Race[and a single ("Dark & Rainy Street") co-produced by Chris Thomas.

If you've heard any of Chuck's many great recorded performances, and would like him playing on your recording, he can record tracks and send them to you! How great is that?!!! You can contact him via his website.

Although there were many artists we could have discussed, Chuck graciously answered my XTC-centric questions. His replies, like his playing, were concise, yet thoughtful and illuminating.

How did XTC come to be aware of you?

Matthew Vaughn, the programmer, who had worked with the producer before, recommended me as I had just finished recording The Lion King with Elton John and Matt was on that project.

How did you learn the tunes? Did they send you the tracks beforehand?

No, I never get the tracks sent beforehand. I just listen to them, make a chart of the arrangement and how I'm going to approach it, and then just go in and play it.

When you were tracking with XTC was the whole rhythm section recording at the same time or were you by yourself?

I was by myself with the guys ( Andy Partridge & Colin Moulding ) and Steve, the producer in the booth. I was tracking along to the instruments that had already been recorded.

Were you aware of XTC before you played with them?

Oh yes, I was aware of their songs, particularly their hits, but I've become much more aware of them since, I have to say.

Did most of the direction regarding the song come from the writer , either Partridge or Moulding?

Did Partridge and Moulding differ in their methods of recording their songs?

No, but they were similar in that they made suggestions about the drum parts rather than demands.

Did either of them express any preference towards certain drum textures or sounds, or did they just say " Go to it"?

Once I got set up and got the drum sounds, they were already pretty happy about things. Andy didn't suggest, but he did ask if I'd ever tuned the drums to any particular key, which isn't something I've done. I just tune it to my ear, and if there's any problem with the tuning in a song, I'll re-tune or mute the drums a little bit, so there's not so much ring.

Everything went really smoothly. There were very happy with the drum tracks. When we started, I think they only had 2 or 3 songs in mind for me to record, but we ended up doing 7. A couple of them had drum tracks already, which I replaced.

Were there any tracks that were more challenging or you had to think about more than others?

No.  However, Maypole was different than most pop arrangements and my chart took slightly longer to write out before I played it.

You were one of the last people to record with them as a band. Did you get any sense that things were coming to an end or they were getting tired of working together?

I didn't feel that. In fact, we all went out for dinner on a couple of occasions. What I felt most,  was their frustration with their record labels and how that had taken the wind out of their sails.

Was there anything in particular you learned from working with XTC?

Every session is different and enjoyable for different reasons, but no, nothing stuck out except that it was a great session, and I enjoyed working with the guys.

…..and for those of you who just can't get enough XTC, I'm posting interviews with Dave Gregory and Andy Partridge from Gregg Bendian's great series The Progcast. Enjoy!