Hi folks,
As promised, here's more content and in direct contrast to the Scraps post, this is relatively readable. I mentioned earlier in the "Hipifying the Rudiments" post, one of the two main problems with unaltered rudimental material is that they are too downbeat oriented, and too symmetrical. Recently, i was working with a favourite rudiment of mine, the Flam Accent. As you can see in Ex. 1, it's just triplets with a flam at the beginning of each set of three. I may have mentioned this before, but I like also putting the flams on the third triplet of each set  (Ex. 2) and the second (Ex. 3). I show them in this order because most people find the second triplet the "weirdest" of these three, and thus the hardest to feel.
Okay, so that takes care of the constant downbeats, but what about mucking about with the evenness of each of these patterns? Ex. 4 shows a 13 triplet note pattern, so it is guaranteed not to fit into a bar of 4/4 evenly. Now, it may look complicated but it really is just a case of playing a bar of triplets in 4, and then adding an extra 8th note with the bass drum. The trick is of course that it isn't 13/8, but just a 13 note pattern that moves through the barline. It's recommended that you play through each measure separately, then start putting bars to together until you can hear how the pattern goes over the bar and still keep your place in the four bar phrase. Also, note that I haven't written out the pattern until it "resolves" or starts back again on 1. I think it's more useful to hear the phrase as it moves through the barlines rather than artificially counting to 13. Unless you're playing a thirteen bar tune, I think that would be confusing and extra work.
After we get handle on the phrase with the bass drum playing the "extra" triplet, I wrote it out so the left hand plays the thirteenth note. (Ex. 5). In this case, you could play a light 4 on the bass drum, and in all these examples, hi-hat on 2 & 4.
The last two examples are just like the previous ones except it's a shorter seven triplet pattern.
(Note: When I worked on these odd patterns, I preferred to start with the flam on the upbeats, like example 2. That way the "hand" part with the last flam is immediately followed by the bass drum. You might want to experiment with this.
(Note Note: I couldn't figure out how to write the grace notes in the stickings so whenever the flam says "R" the left hand is playing the "little" note and for all "L"s, this is reversed.
Have fun! 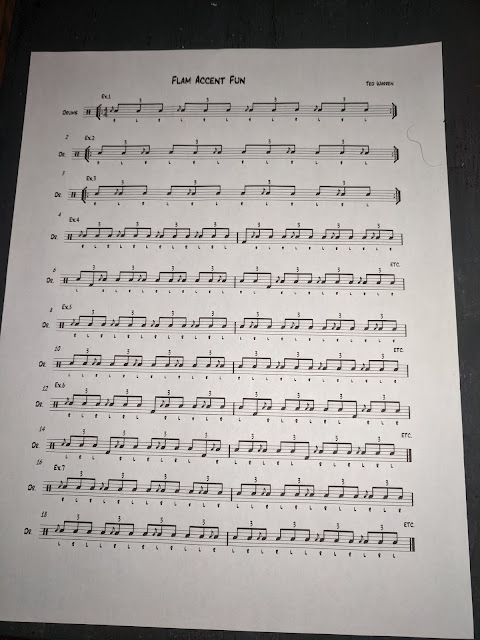 Oh, and as Todd Bishop would write, get the pdf!