Yes, it's another hard-to-read set of exercises I made up. It's paradiddles between the bass drum and snare ( it sort of reminds me of Drummer's Cook Book or some of the Carmine Appice literature from the '70s ) but with syncopated open and closed hi-hat so it becomes more of a 4-limb thing.

Here's the scrap….. (P.S. All the examples are in 4/4, but I just wrote out the first 2 beats, because the last 2 beats of each bar are exactly the same. 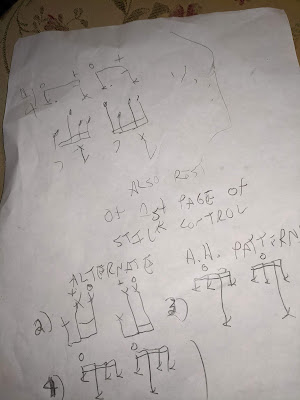 Fortunately I filmed all the examples as well. Here they are in the order in which they appear….

As it says on the scrap, we can use all the stockings from the first 3 pages of Stick Control as source material for this. I quite liked the doubles, which gave these a sort of Tony Allen Afro-beat vibe.
This is probably my last post before the holidays so Season's Greetings, thanks for the gifts of love, family , and music and we'll see you in the New Year!

UPDATE: I totally forgot to mention I'll be performing  the premiere of " The Saskatchewan Suite" in Regina on Dec. 28th. I'm very excited about this, but I'm almost as excited about having some time after the gig to check out Juliana Pizza; apparently where Regina style pizza was born! I think going to Ground Zero/Mecca of regina Pizza is going to be serious mind-blower! Stay tuned for further developments…………..