The drummers of XTC Part 1!

Hey there,
Anyone who knows me or this blog is aware I like a lot of styles of music.
I have always loved Pop music and one of the greatest Pop bands ever, in my opinion was Swindon's XTC.
There's a lot of info on the band online so I won't go into huge detail here.
XTC was a band that started in the New Wave era of the late 1970's. They had two main songwriters (Andy Partridge and Colin Moulding). Here's one of their first big hits, penned by Moulding, "Making Plans for Nigel".
Check out that beat Terry Chambers is playing! Killer!
(Confession, I quoted that beat on a version of "I'm Old Fashioned" on Kieran Overs' "Quartetto" CD. The Jazz police still have a warrant for my arrest on that one!)
Anyway, after several more years and albums they stopped playing live because of Partrige's increasing stage fright. In fact I saw them opening for the Police in Regina in 1980 as a trio because, presumably, Partridge wasn't well enough to do that gig. They were great anyway.
It's interesting how much great music I love ( by Beatles, Steely Dan, Kate Bush, XTC, and Glenn Gould, to name a few) was made by people that stopped or rarely played live.
It's a fact, regardless of the music you play, live playing will kick your butt in a number of ways!
So XTC gave up touring, their drummer Terry Chambers left, and they started concentrating on making recordings. Then something fascinating happened. The song writing quality keep improving. Also, instead of hiring different session drummers for each song, they tended to hire someone and have them play on the whole recording.
I loved when new XTC records came out because I knew the music would be great, and I'd get to hear another drummer's take on it as they tended to hire a different player each time!
One of my favorite album's is 1992's Nonsuch. It features the great Dave Mattacks on drums.
Mr. Mattacks was kind enough to answer my questions about this recording but first, a pic and some bio information. 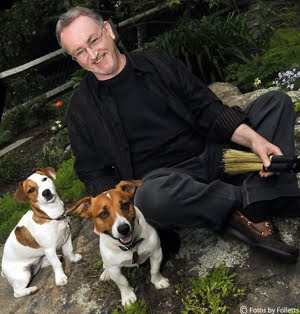 1. Were you aware of XTC's work before you did the sessions or was it more of a "cold call" situation where you just knew you had to be at the studio with your drums at such and such a time?

2. Did the two songwriters, (Moulding and Partridge) have different working methods in the studio?

Did they have specific suggestions for drum parts, or did they talk in metaphor and you jammed until you found something that clicked?

OCCASIONALLY , THEY HAD SPECIFIC IDEAS - OTHER TIMES T’WAS LEFT TO ME .

3. There's a great vibrant drum sound on "Nonsuch". How much input (besides your tuning and playing) did you have into that?

IT WAS RECORDED WELL & MIXED WELL .. BUT WHAT DO YOU MEAN – “BESIDES MY TUNING & PLAYING “ ? ARE YOU REFERRING TO THE TEAM OF TOP-NOTCH DRUM CARTAGE PEOPLE THAT GO TO-&-FROM EVERY REC’ SESSION I DO - & TUNE / SET-UP MY DRUMS FOR ME ? [ British Irony ]

4. Andy Partridge claims you were a little "shy" about playing the shuffle beat on "The Disappointed". It's hard to believe because the track feels so great. Is there something about those types of grooves you find challenging?

I DID A LITTLE BACK THEN – I THINK I’M PLAYING THAT KIND OF THING BETTER THESE DAYS.

5. The drum part on "Omnibus" is very unusual. How did you come up with that?

A MAGICAL COMBINATION OF {1} INSPIRATION AFTER HEARING THE SONG {2} SOME INPUT FROM ANDY {3} SWEAT.

You've played on countless recordings over the years with a variety of artists but is there anything you learned specifically from the sessions on "Nonsuch"?

FURTHER SOLIDIFICATION THAT - IMHO. - {1} THE SONG IS KING – GREAT ONES ESPECIALLY SO - & {2} WHEN YOU ADD GOOD SINGERS / PLAYERS / REC’ ENGINEERS, YOU GET A PRETTY GOOD RESULT.

I thought I's add examples of some of the tunes that were discussed.

Here's "The Disappointed" and I think it's pretty clear that Mr. Mattacks plays a mean shuffle, then and now!

Stay tuned, I'll have more XTC drummers in the near future!